It’s the final day of Hard Rock Hell with the likes of The Treatment, Chrome Molly and Black Spiders paving the way. If I wasn’t so pushed for time, covering the festival alone – I’d have been out and about much earlier in the day.

However, I do find time to indulge my fan instinct with a visit to the Blaze Bayley and Paul Di’anno signing session. Armed with my original ‘Iron Maiden’ vinyl album cover, I arrive a good half an hour before the signing is due to start, to find a massive queue has already formed. I’m only here for Di’anno, so when the announcement is made that: “Paul is stuck in traffic and won’t be able to make the signing”, I walk away absolutely gutted. Surprisingly, this doesn’t appear to deter anybody else from leaving the queue – which I guess says a lot for the popularity of Bayley.

Blaze Bayley
My experience and knowledge of Blaze Bayley is limited, apart from seeing the reformed Wolfsbane support Saxon a couple of years ago and being aware of his spell with Iron Maiden. As a follower of Maiden myself only until the mid-eighties, I’m as familiar with the two albums he appeared on as I am with another seven that the Air Raid Siren fronted. So today’s ex-maiden-vocalist-double-biller begins with pretty much the unknown for me. I’m surprised to find that I do have some recognition of opener ‘Lord Of The Flies’ and that the chorus to ‘Futureal’ has me muttering along. However, I must stress this is just me, the huge crowd who have turned out bellow along to every word. The Blaze Bayley era is most definitely appreciated here, and it’s clear that the band who back both Blaze Bayley and Paul Di’anno are absolutely top draw – it IS Iron Maiden, well it isn’t, but you could be forgiven for thinking it is. Along with boundless enthusiasm and energy, Bayley has a great, relaxed rapport with his audience – taking the mick out of those not enjoying the show as much as he would like them to. He’s a happy, clappy showman who just can’t stand still, grinning throughout and enjoying every moment up there. There are various points of view about the songs and the voice but I have no pre-determined opinion. Like anything post-1984 it’s not what I would call ‘proper’ Iron Maiden, but Bayley‘s vocal for this particular set of songs is good, it’s really good – no mistake. He tells us that his voice is the best it has ever been, so whether this is a big improvement on the original I’m not sure, but it certainly does a great job of belting out ‘Judgement Of Heaven’, ‘Lightning Strikes Twice’ and ‘Sign Of The Cross’. ‘The X Factor’ was known to deal with darker themes than previous albums, and introducing ‘Blood On The World’s Hands’ Bayley makes time to reminisce, referring to Steve Harris’ lyrics being as relevant today as when they were written. There’s a huge gleam of admiration from the Maiden hardcore as they soak it all up prior to ‘The Clansman’ and ‘Man On The Edge’ carrying them all through to the end, before Bayley takes a bow and makes way for his touring partner .. 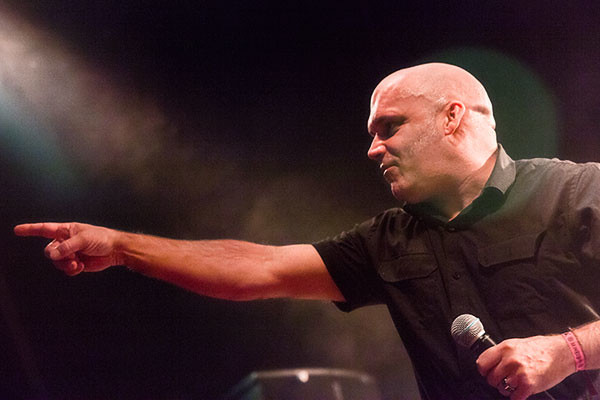 Paul Di’anno
In the blink of an eye – the era of a band that leaves me vaguely contemplative, to the very beginning of a musical obsession. There’s plenty to be read and said about Paul Di’anno since the release of those first two influential Iron Maiden albums, but for what is apparently his final UK performance, the opportunity to be here today – for any old school Maiden fan – is nothing short of a privilege. Di’anno hobbles out on stage – the knee injury we’ve heard about is evident, which along with a troublesome mic stand leaves him struggling for a comfortable stance. He apologises for not getting to the signing session, which was apparently nothing to do with traffic at all, but because he “had the shits”. To be honest, if I’d given this entrance much thought this is probably not how I would have imagined it, but you have to smile – and perhaps wince – at the reality and honesty of it all. Kicking off with ‘Sanctuary’ and ‘Purgatory’ Di’anno and the super talented band transport me back to my teenage years when tunes such as these were all that really mattered. Of course Di’anno‘s signature raspy, wailing vocal has faded somewhat. Perhaps a little more ‘shouty’ but it’s not that bad at all. Through ‘Wrathchild’ and ‘Murders in the Rue Morgue’ – knowing these songs as well as I do, or at least once did – I can hear the accompaniment of himself from back then. Prior to ‘Remember Tomorrow’ Di’anno speaks of the late, great Iron Maiden drummer Clive Burr. Sharing his regret of not being able to make it back from Brazil for the funeral of his “brother”. Clearly choked Di’anno dedicates the sombre song to him, with myself amongst others feeling the moment. It’s a “best of” set from both the ‘Iron Maiden’ and ‘Killers’ albums. ‘Charlotte the Harlot’, ‘Killers’, ‘Phantom of the Opera’ and ‘Running Free’ are sandwiched in-between the instrumentals ‘Genghis Khan’ and ‘Transylvania’. There’s nothing glamourous about the performance, but who cares, when the band are technically excellent and you have Paul Di’anno singing classic Maiden? Not me! Joined by Blaze Bayley for a rendition of ‘Iron Maiden’, Di’anno completes his set with the Sex Pistols’ classic ‘Holidays In The Sun’, maybe confirming it is time to retire, or perhaps just to remind us that he’s always been a punk. Whatever the future may hold for Paul Di’anno, I’m thankful for the chance to see him – and without doubt, the highlight of my HRH weekend. 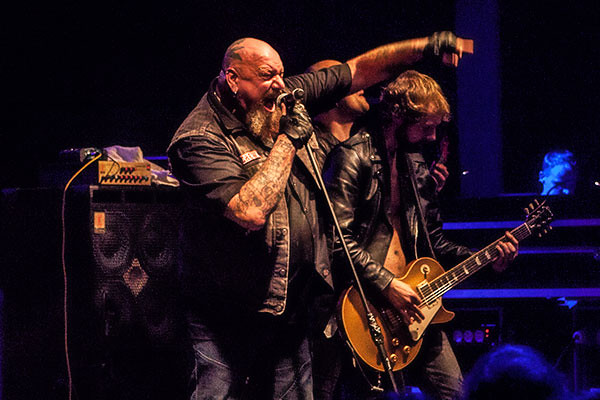 Michael Monroe
Michael Monroe has influenced many rock ‘n’ roll artists and bands with Hanoi Rocks often mentioned as the founding fathers of Hollywood’s glam-rock scene. If there is a ‘Showman of the Weekend’ award – it has to go to Michael Monroe, and I say that prior to today’s show. Charismatic, flamboyant and fun, pretty much sums up the Michael Monroe live experience, as he runs back and forth across stage, high kicking, jumping and doing the splits with eye watering ease. One minute he’s posing centre stage, the next he’s flying around from stage to audience, before bounding on and off the PA stacks. Embarking on a set which includes a good chunk of material from the recent album release ‘Horns and Halos’, including the title track, ‘TNT Diet’, ‘Ballad of the Lower East Side’ and ‘Stained Glass Heart’, the wide-eyed Monroe -flanked by Sami Yaffa and Steve Conte – looks and performs like the perfect front man, sounding fantastic both as vocalist and saxophonist. The entire band is on fire, ripping through the Demolition 23 track ‘Hammersmith Palais’ and Hanoi Rocks classics ‘Motorvatin’ and ‘Malibu Beach Nightmare’ with Monroe slowing down for nobody. ‘Dead, Jail or Rock ‘n’ Roll’ completes what can only be described as a stellar performance from this veteran rocker. Take note kids – Michael Monroe may have been around for thirty-odd years, but this is a guy still setting the highest of standards. 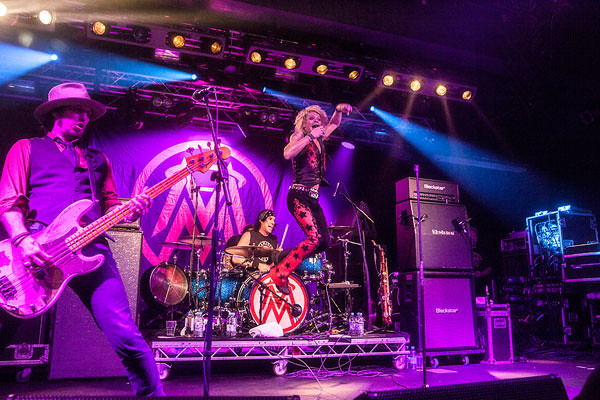 Airbourne
I’ve seen tonight’s headliners Airbourne twice previously, with the Aussie foursome delivering an AC/DC-esque knock-out show on both occasions. At this time of night, it’s thumping, party rock that Hard Rock Hell demands, and as I’ve already assured several folk amongst an eagerly awaiting audience – that’s exactly what they are about to get. Opening up with ‘Ready to Rock’ and ‘Too Much, Too Young, Too Fast’, it’s with breakneck energy that Airbourne grab their audience by the scruff of the neck and drag them along to the party. Frontman Joel O’Keefe climbs aboard a security guard and goes walkabout through a mass of excited onlookers, letting loose with plenty of blistering guitar work. As O’Keefe completes a near circuit of the main room with the majority of attention upon himself, the rest of the band – his brother Ryan (drums) along with David Roads (rhythm guitar) and Justin Street (bass) – don’t let up on their own thrashing whirlwind performance, with the pair centre stage giving it some serious windmill action. There’s a bunch of similarly banging tunes from the three album catalogue including ‘Girls in Black’, ‘Black Dog Barking’ and ‘Raise The Flag’. These and other songs probably don’t run too deep with emotional lyrical content, but that’s not what Airbourne are about, they’re about being loud, brash and hard hitting from beginning to end. The audience love it, and so they should, this stuff was written for such adoring festival crowds. As expected, the subject of The Ashes is mentioned – O’Keefe bowling a can of beer out into the audience for a young lady to catch, suggesting she should play for England and getting himself booed, much to his amusement. During the encore comes another circuit of the room followed by a beer can head smashing competiton with Black Spiders frontman Pete “Spider” Spiby – all fun stuff which only adds to the attraction of Airbourne and will undoubtedly see their upcoming UK headline tour sell well. They finish with ‘Runnin’ Wild’ the title track from their 2007 debut album, leaving to a thunderous reaction from a hot and sweaty Hard Rock Hell. Suffice to say, if anybody here had not seen or heard of Airbourne before today, I guarantee they have left their mark on them tonight. 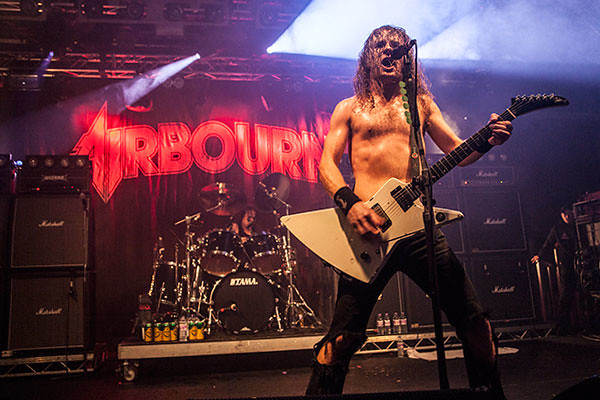 The Answer
It’s late, there’s a half hour overrun and everybody wants to get out of the oven-like conditions after the sensational Airbourne show. Probably not the ideal pre-gig situation for any band, but having opened for Aerosmith, toured with AC/DC, performed alongside Paul Rodgers, and with Joe Elliott and Jimmy Page as fans, it’s just a simple day at the office for Irish blues rockers The Answer. This is a band totally on top of their game, with Cormac Neeson’s terrific voice wailing and howling like a cross between Robert Plant and Bon Scott, the monster guitar playing of Paul Mahon, and the solid rythym section of bassist Michael Waters and James Heatley on drums – if you’ve missed these guys to date, they are really worth checking out. The talent of The Answer emanates throughout the main room during their first couple of numbers ‘New Horizon’ and ‘Come Follow Me’. Before long their catchy song writing – clearly influenced by Led Zeppelin, Free and Thin Lizzy – draws plenty of others in. Within a short amount of time the place is pretty much rammed for a perfect end to a perfect night. I’ll keep on about his voice because it is so good, but also unassuming with long blonde locks, Neeson really is nothing short of a young Robert Plant. Through a thirteen track set including ‘Burn You Down’, ‘Nowhere Freeway’ and ‘Memphis Water’ he oozes white hot soul from every pore. The Answer provide a cracking end-of-weekend show, which includes a Happy Birthday singalong for guitarist Mahon and the audience being asked to pose with the band for a photograph. Completing their set with ‘Waste Your Tears’ and ‘Preachin’, Neeson sums up their performance and the weekend perfectly when he says: “Who thought a holiday park in the middle of winter could be so much fun?” 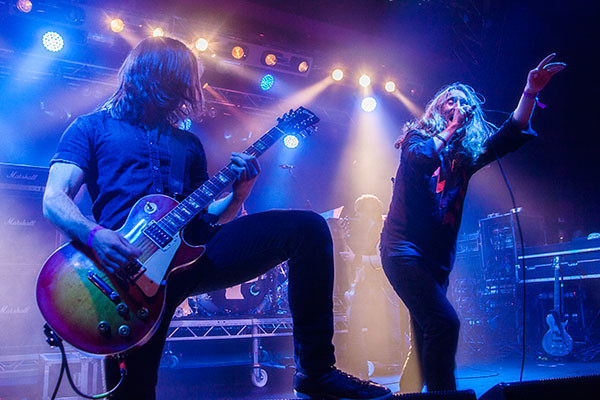 For those who are out to party and can stand the pace – the Jagermeister stage has Tracer and Lawnmower Deth on offer into the early hours of Sunday morning. I however, have to tip my hat to those who can and bid farewell Hard Rock Hell VII: Cirque Du Rock. It’s been a brilliant weekend, superbly organised and already I’m looking forward to my return visit to Hafan Y Môr Holiday Park in March 2014 for Hammerfest VI: Book Of The Dead.