The seventh edition of Hard Rock Hell is subtitled “Cirque Du Rock”. Now an annual pilgrimage for many, the North Wales, holiday camp, winter festival experience has been sold out since May.

If you’ve never heard of Hard Rock Hell Festival, it’s run by Chic Talent who stage 13 festivals in the UK alone, engaging in all areas of production, promotion and logistics. Previous line-ups have always caught my attention, but the time of year and distance to travel has stopped me taking the plunge. But not this year, although being here alone, and with Hard Rock Hell VII offering around fifty artists, over three days, across two stages – my intention is not to run myself ragged. I’m here to concentrate on the names I know – those primarily being the main stage headliners and supporting acts. With proceedings underway on the Thursday evening, my plans to make it to deepest, darkest Pwllheli in time to see German guitar virtuoso Uli Jon Roth are thwarted by the weather and traffic. By the time I’ve settled into my chalet – a welcome luxury compared to usual festival accommodation – and I’m over at the “Cirque Du Rock Ball”, it’s time for legendary Irish axeman Bernie Tormé to take the stage.

Bernie Tormé
As a young lad I didn’t know his name, but as the guitarist for Gillan who altered the dynamic of the band towards a more metal direction – Bernie Tormé played a part in my musical upbringing with his work on the albums ‘Future Shock’ and ‘Double Trouble’. In addition, this is the guy who was called upon by Ozzy Osbourne to fill in on rescheduled dates resulting from the tragic death of Randy Rhoads, before playing in various incarnations of his own band and with Dee Snider in his post-Twisted Sister outfit Desperado. For those who are aware of his legendary status, and for those who are not, tonight Bernie Tormé makes us all perfectly aware of what a blazing guitarist he is. Firing up with ‘Wild West’ and ‘Bullet In The Brain’ from his Electric Gypsies and Guy McCoy Tormé (aka “G.M.T”) days respectively, this is just a taste of what is to come from the master and his band. The material is heavy blues-rock, soaked in Hendrix, Beck and Gallagher influences. Tormé‘s fretwork is not over-indulgent (although perhaps just occasionally) but delivers kamikaze licks and runs from within great songs. It’s a blissful barrage, which the captivated audience is involved in from the off as Tormé encourages clap-alongs, alternating between pure emotion and grinning like a Cheshire cat throughout the likes of ‘Getting There’, ‘Golden Pig’ and ‘Mystery Train’. Finishing the show with ‘Trouble’ and ‘New Orleans’ from those great Gillan days, Bernie Tormé and his band have proved to be intense, they’re raw and they are fun. I really had no idea what to expect, but as they exit – I realise I’ve only been at Hard Rock Hell for just over an hour, and I love it already! 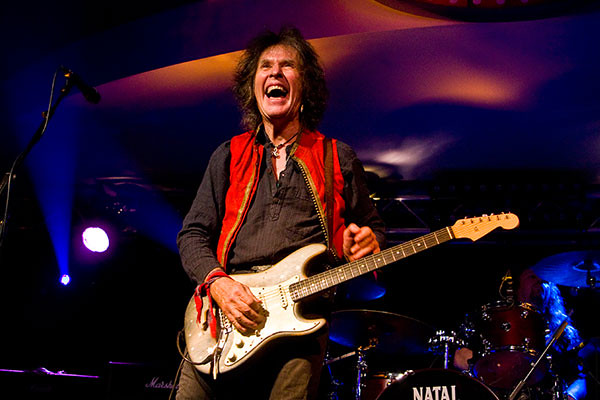 Arthur Brown
Next up, tribal statues stand either side of the stage in preparation for the flamboyant, theatrical God of Hellfire himself Arthur Brown. Forever immortalised for his 1968 hit ‘Fire’ and for being a major influence on stars such as Alice Cooper, Marilyn Manson, Kiss and King Diamond – the 71 year old is as crazy and expressive as ever. In robes and psychedelic face paint he enters to the title track from his recent PledgeMusic album ‘Zim Zam Zim’. Leaping around with the enthusiasm of a man half his age, Arthur Brown‘s theatrical presentation and his incredibly powerful falsetto vocal range is both a pleasure to bear witness and listen to. Yes, it’s different and of course it’s all a bit weird, but it’s nothing short of wonderful to experience this inspirational force in music, this rock icon. As Brown lets loose his energy in all manner of guises – alone and with a female dance partner – it would be easy to miss that his band are an impressive outfit of young musicians. In the shadows is guitarist Nina Gromniak, who stands out as a promising talent. Arthur Brown‘s intensity and insanity spans the entire set which is made up of the old and the new – from his latest album comes ‘Muscle Of Love’ along with the 1967 single ‘Devils Grip’ and a fantastic cover of the Screamin’ Jay Hawkins number ‘I Put A Spell On You’. To finish it can only be ‘Fire’, which if isn’t mind-blowing enough to hear live from the man himself, is followed by his take on Fleetwood Mac’s ‘The Green Manalishi (With the Two Pronged Crown)’. It’s an awesome end to a fantastic show, and quite frankly if there wasn’t so much to come over the next couple of days – I could pack-up and go home quite happy now. 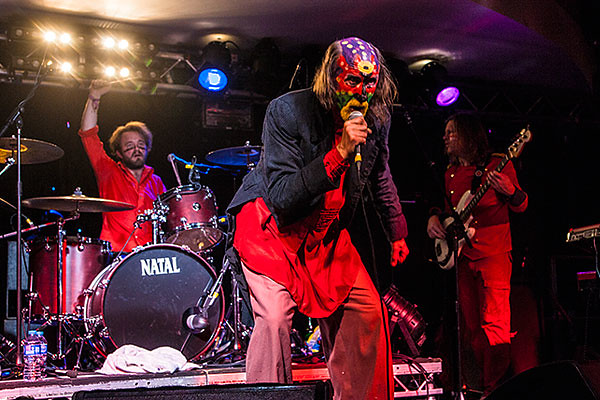 Attica Rage
Final band of the evening for me is Glaswegian heavy rockers Attica Rage who’s name and geographical formation I know, but that’s about it I must admit. So, with classic old boys Tormé and Brown having done a heavy load of their business all over the place, I’m hoping these lads are going to be equal in their task. And how far less disappointed could I be? None so! Attica Rage are quite simply a no-nonsense, balls to the wall, powerhouse rock’n’ roll band. If I had kids, this is the stuff I would want them growing up on. It’s quintessential metal, it’s biker rock, it’s down the pub Motörhead-banging stuff of today. Mild-mannered, rough and ready frontman Jonny Parr, his brother/drummer Richie Rage, Stevie Bell on guitar and bassist Colin Wilson (yeah I want it to be Grigson too!) hammer through some stomping tunes like ‘Beyond Forever’, ‘Killer Carousel’ and ‘Long Ride Home’ – with the HRH masses lapping it up from beginning to end. The only slight negative to my inaugural Attica Rage show is the mid-set, on-stage accompaniment of dancers. I gather this distraction is the festival’s doing, and what’s a rock show without some girls? They return during the band’s final number – a ballsy cover of The Osmond’s ‘Crazy Horses’. Along with the whole “Cirque Du Rock” theme that has played out throughout the evening, I guess it somehow works. 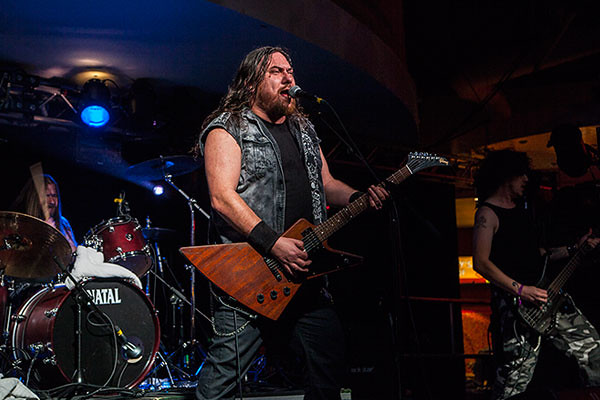 So, only after my first few hours here, as I trudge back to my warm chalet, I’m asking myself – why have I never been to Hard Rock Hell before? But with another two days to go – my wonderings are easily dismissed, as I look forward to plenty more to come.