Many people were surprised to find French metallers Gojira playing second fiddle to Ghost on the Jagermeister Music Tour. So after an impressive opening set from The Defiled, the place has really heated up for the quartet from Bayonne.

As they enter stage to a creepy wind-chiming intro tape – the O2 Academy erupts with the chant “GO-JIRA! GO-JIRA!” confirming a good proportion of the audience are here to see them.

Gojira are commonly described as progressive/technical death metal, and when this genre is delivered live at its best, it’s a force to be reckoned with. Opening with the massive sound of ‘Explosia’ from their highly acclaimed 2012 album ‘L’Enfant Sauvage’ – it’s an aggressive outpouring from band to audience, and vice versa as the place goes banging and moshing crazy.

Through the ever-changing riffs and time signatures of ‘Flying Whales’, ‘Backbone’, ‘The Heaviest Matter Of The Universe’, ‘L’Enfant Sauvage’ and ‘Toxic Garbage Island’ one has to be impressed with the song structures and technical ability within them.

As vocalist/guitarist Joe Duplantier rages through environmental themed songs, his brother Mario belts out precision drumming, with a solo towards the end. Bassist Jean-Michel Labadie charges around, flinging his bass from side-to-side at every given opportunity, whilst guitarist Christian Andreu is the only mildly sedated member of the band, as he churns out flourishes of lead guitar work.

Gojira’s unrelenting set is hammered home with ‘The Axe’ and ‘The Gift of Guilt’, as they leave the stage triumphant in their performance and reception. 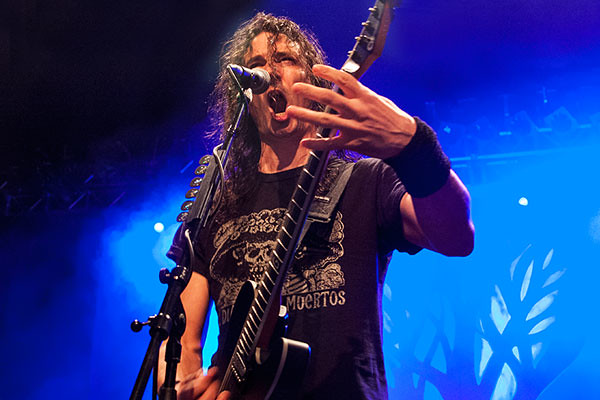