I’m pleased to be back at Hafan Y Môr Holiday Park in Pwllheli, North Wales for Hard Rock Hell, the end of year festival highlight. With plenty of bands over two stages for three days – there’s plenty of press teams covering the entire event, but as a lone wolf I’m here to cover what I can on the main stage.

Trucker Diablo
Gutted as I am to miss festival openers Screaming Eagles I do make it in time for Northern Ireland rockers Trucker Diablo. Aware of their high profile endorsements and appearances to date this is a new band to my ears, but with ‘Fight Life’ and ‘Black And Blue’ I’m roped in straight away to their melody drenched, steamrolling rock n roll with a southern twist. First band of day one and already I’m kicking myself that I’ve missed these boys until now! A band ducking in and out of Black Stone Cherry and even occasional Thin Lizzy territory – lead by guitarist/vocalist Tom Harte – Trucker Diablo have a superb song-writing formula. From the upbeat, radio-friendly ‘Drive’ through the lighter raising ‘Murder Ballad’ and into the anthemic ‘Juggernaut’ – this is modern day rock n roll of the highest calibre. The piledriver party anthem ‘Drink Beer, Destroy’ mashed up with Metallica’s ‘Seek & Destroy’ whips up anybody not yet on-board, before the poetic mix of crunching guitars and sing-along choruses are brought to a close with ‘We Stand Strong’ and ‘The Rebel’. Fantastic stuff from Trucker Diablo to get my Hard Rock Hell up and running.

Attica Rage
Hard Rock Hell 7 is where I discovered Glaswegian heavy rockers Attica Rage for the first time. An impressive, full-blooded, biker rock band formed in 2003 by brothers Jonny Parr on lead vocals and guitar, and Richie Rage on drums. Belting it out to the first night masses, the insanely heavy riffage of ‘Killer Carousel’ and ‘Safer Inside’ intertwine with the slower breaks of ‘Long Ride Home’ and ‘Through The Inner Eye’ to create a metal soundtrack of distinct quality. Along with Parr, the red-headed whirlwind that is Stevie Bell delivers devastating lead guitar whilst relatively new cohort Matthew Ward on bass gives a thumping representation of himself along with drumming stalwart Rage. Well received is a cover of Motörhead’s ‘Killed By Death’ – dedicated to Phil Taylor who the world of rock n roll sadly lost today – as is a version of The Osmonds ‘Crazy Horses’. Parr gives a final nod of appreciation to HRH, pumping up the anticipation for Black Label Society before ‘Back To The Old School’ sees out the set. Over a decade into their stride Attica Rage remain a force to be reckoned with and one which any no-nonsense rock fan should investigate.

Black Label Society
Once the lights go down, the air raid sirens wail and the PA begins to blare out ‘Whole Lotta Sabbath’ there is no restraining a good proportion of the packed-out crowd, here to represent the Welsh chapter of Zakk Wylde’s Black Label Society. The man mountain along with his band of brothers lets the room have it with an opening salvo of ‘The Beginning … At Last’ and ‘Funeral Bell’. The sound isn’t brilliant, but it’s loud and it’s brutal and that’s enough for the BLS faithful. A relentless onslaught includes the likes of ‘Suicide Messiah’, ‘My Dying Time’ and ‘Godspeed Hell Bound’ with Wylde up on his platforms, displaying his frenetic fretboard manoeuvres and beckoning the crowd to roar with appreciation. Undertaking a dazzling mid-set solo, the guitar maestro is accompanied by fine musicians. Bassist John DeServio flies around the stage demonstrating his own incredible playing technique, whilst guitarist Dario Lorina and drummer Jeff Fabb take on their individual tasks with conviction. A quieter interlude sees brother Dario on the piano for ‘Angel of Mercy’ before Wylde takes over for the emotional Dimebag Darrel dedicated ‘In This River’. Closing with ‘Concrete Jungle’, ‘Stillborn’ and with a beating of his chest, Zakk and his Black Label Society brothers bid farewell to HRH in true end of sermon fashion. 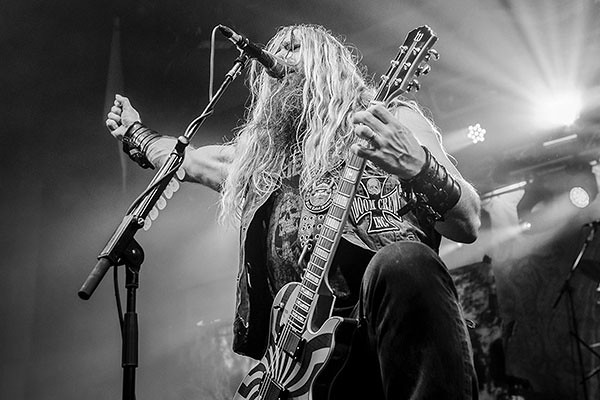 Massive Wagons
Not too many bands can follow a headlining set from the legendary Zakk Wylde, so when a straight up, rock n roll outfit capable of re-energising those who have faded is needed, it’s time to roll out those Massive Wagons. Vocalist Baz Mills leaps straight into action during ‘Welcome’, wildly stomping around his natural habitat along with lead guitarist Adam Thistlethwaite and Carl Cochrane on rhythm guitar. They pile through a combination of influences with ‘Black Witch’, ‘One For Me’ and ‘The Truth’ all of which contain the power and raunch of AC/DC and the rawness of early Crue. All of this before the Lancastrians openly tip their hat to classic British rock by hammering out an inspired cover of Rainbow’s ‘Kill The King’. With Bowz Bouskill on bass and Alex Thistlethwaite on drums there comes ‘Red Dress’ the thumping slab of melodic rock and first official single from last years ‘Fight the System’ album. This is followed by the title track and a cracking set finisher – Quo’s ‘Down Down’, before Massive Wagons head out of Hard Rock Hell, having thoroughly entertained first night party goers and picking up a bunch of new fans for sure.