Unbeknown to most of us Code Orange have been skulking around Pennsylvania and the east coast of the U.S. for nigh on ten years, so the opportunity to maximise on the current buzz about the band on this side of the pond is a great one.

Hit The Lights piles into the Birmingham O2 Academy along with a hoard of expectant pit heads looking for their Saturday night metal fix. Before the guaranteed, gargantuan headliner Gojira there’s time to catch a support set from Code Orange.

It appears from the get go that Code Orange are not about to let this one slip. There’s a lot going on with this band so you have to pay attention. Three is a magic number for these guys, with the triple pronged lead vocal attack of drummer Jami Morgan, Eric Balderose and the cherub faced Reba Meyers and the guitar triumvirate of Meyers, Balderose and touring specialist Dominic Landolia.

It all fits together ridiculously well as Code Orange take us on a ride through metalcore with a twist. From the opener ‘Forever’ to the insane final salvo of ‘The New Reality’ it’s breakneck fayre for all who look on.

Bassist Joe Goldman leads the visuals with some lethal looking spinning back kicks as he and Meyer bound around clearly competing for the “Flubber” endorsement we’d all love to possess.Code Orange definitely have their shit wired right and it’s a very impressive spectacle designed to convert and keep the allegiance of all who see it.

In truth, Code Orange deserve much better than they get from the O2 gathering tonight, prompting Morgan to declare that we may not know who Code Orange are but we’re “gonna find out”. It’s true though, it doesn’t matter if nobody knows who you are when you get there, it’s about making sure everyone knows by the time you leave. Job done then Code Orange, job done indeed. 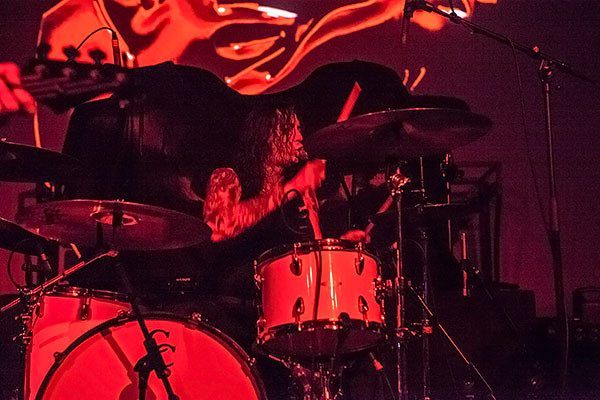