Original members Dave “The Snake” Sabo (guitar), Rachel Bolan (bass), and Scotti Hill (guitar) enter along with drummer Rob Hammersmith who joined in 2010 and Johnny Solinger, frontman since 1999. With exuberance and confidence the band launch into ‘Let’s Go’ from the recent EP release ‘United World Rebellion: Chapter One’, before reverting back to ‘Big Guns’ the opening track from the 1989 self-titled debut album.

Maybe not everybody would agree, but Skid Row were, have and will always be about the Sebastian Bach era, and even then it’s only the strength of the first two albums which keeps the band alive for me. As Solinger begins his opening speech of: “We’ve been waiting a long time to see you guys ..” I really want to be enticed into his Skid Row. But whilst he’s been a member for 14 years, his vocal remains in the shadow of Bach, never quite reaching the heights you want during ‘Making A Mess’, ‘Piece Of Me’ and a very early in the set ’18 and Life’. All that said, he’s a great performer, delivering enough of what these songs require, for an audience wanting a little bit of nostalgia.

‘Riot Act’ and ‘In A Darkened Room’ from the heavier second album ‘Slave To The Grind’ are sandwiched in-between ‘Thick Is The Skin’ (2003) and the recent ‘Kings of Demolition’, before a very cool looking, (short-haired these days) Rachel Bolan steps up to say a heartfelt thank you for unconditional support through the band’s career, prior to taking up vocals for the Ramones classic ‘Psycho Therapy’.

Solinger returns, encouraging the audience to take photo’s of each other, themselves and him, to post on Skid Row’s Facebook page, before we’re into the balled ‘I Remember You’. Again, a song that is crying out for Bach’s vocal, although I’m not sure the man himself would be able to replicate the original these days.

Sabo and Hill remain top-notch, intricate guitarists, both retaining the long locks, which the band as a whole got themselves possibly miscategorised as “hair metal” back in the 90’s. They dual it out before ‘Get The Fuck Out’ and ‘Monkey Business’ power us to the end of a set which can definitely be described as “old school Skid Row”- a relief for me and probably many others who know very little material beyond the golden years.

To continue comparisons between Solinger and Bach may be pointless on a tour so long after the relevance of the fact. But as the band return for the mightiest of tracks – ‘Slave To The Grind’ and the debut single ‘Youth Gone Wild’ from the eponymous debut album, it has to be said that Skid Row only come close to sounding as furious as they once did. It’s nobody’s fault, it’s just the way it is.

As the Wolverhampton crowd leave the venue, the question of “Who was the best?” is a common discussion point. On the night, I’m going to have to give it to Ugly Kid Joe, because in addition to their nostalgic value – this is a band who still sound in the here and now. Whereas, Skid Row – who remain a lean, mean rock ‘n’ roll machine – provide a great performance, but are very much reliant on past glory. 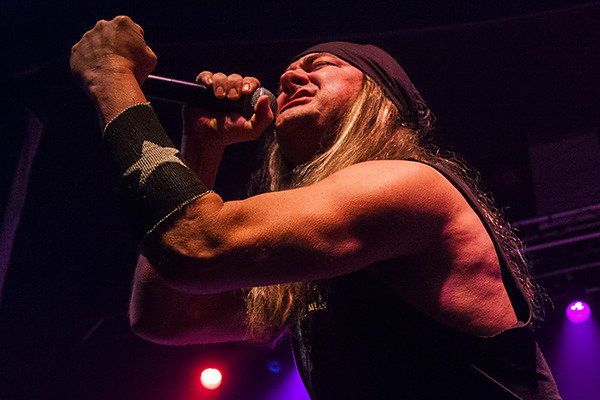