We’re only half way through the inaugural HRH Doom Vs Stoner and already it’s being heralded a roaring success, although understandably for a Sunday, there are quite a few fragile looking faces as punters shuffle into Sheffield’s O2 Academy for day two.

However, there’s no sympathy from today’s Brummie openers Kroh who storm through a great set on the back of Oliwia Sobieszek who has the looks of a marble carved Viking warrior queen and a voice to match the power of Freya herself.

There’s a buzz about Sergeant Thunderhoof and, as they put in a shift of real value here, it’s easy to see why. The sumptuous rock vocals of Dan Flitcroft are re-produced effortlessly live and there is some exquisite guitar work to admire from Mark Sayer. The buzz could easily become a clamour and see plenty of folks lining up to enlist in a growing army of admirers. Catch these guys if you can, wherever you can. 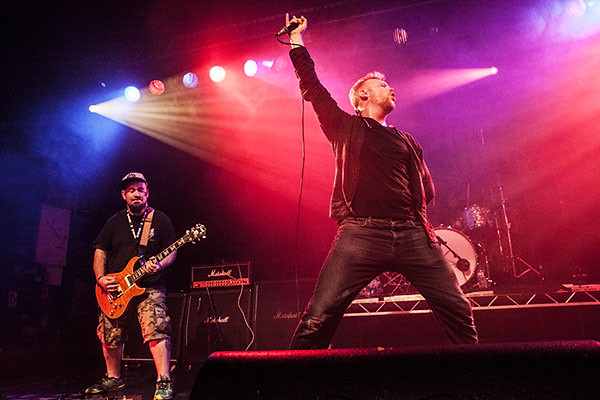 Regulus
So what have Regulus got? I’ll tell you what they’ve got, they’ve got a five foot something frontman, Luke Jennings, who has the voice and guitar sound of a giant, not to mention being a dead ringer for a million Green Man effigies. Then there’s guitarist Tom Osbourne, who’s obviously studied the world’s most badass rock guitarists ever – this kid can play and he does so with a truckload of attitude. Next up is Joe Milburn, a way too cool for school drummer in appearance and playing style, and last but not least a super reliable beanpole bassist, in Martyn Lucas-Bewick who is clearly overjoyed to be on the team and is loving the ride. Regulus have the sheer force and energy to crank the gig up a notch or fifty, and they have the wherewithal to take songs like ‘Blunderbuss’ and ‘Promised Land’ and wrap them up in an explosive power pack and boot them into the faces of anybody standing within their very wide kill zone. Any lingering cobwebs amongst the early afternoon crowd are not just blown away, but are blasted out of the known universe. 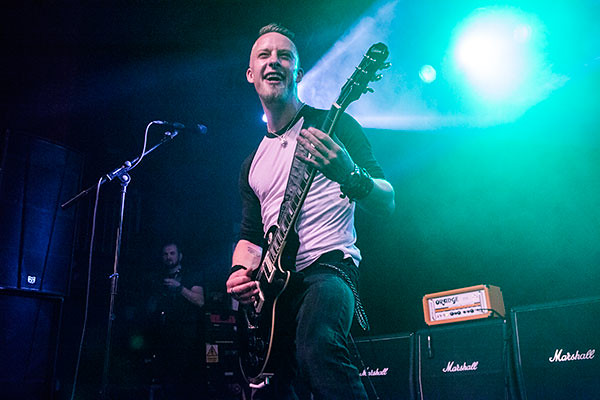 Ohhms
Anyone hoping to catch their breath after the assault of Regulus was going to be disappointed. Canterbury quintet Ohhms have made the long journey north to parade their doom laden wares. The band take the stage to an unchanging smoke infused blue/purple hue, the perfect moody backdrop for what Ohhms have to offer. And what they have to offer is a different kind of breathless – the kind that you get when you see how some people can inject a different level of passion into what they do, the kind you feel when empathy takes over from reality. Vocalist Paul Waller, barefoot and primeval looking, staggers around the stage like an escaped, palsy affected marionette, ricocheting off bassist Chainy, who slithers across the stage, hammering out basslines that hang lower than his extensive fringe. As Ohhms plough through ‘Bad Seeds’ and ‘The World’ guitarist Marc George may look like the milky bar kid but plays guitar like a mean son of a bitch. Fellow guitarist Daniel Sargent and drummer Max Newton also provide great back up. It’s a set that demands our attention and gets all of it. It’s also a set which seems to fall a little short on time, which is a shame because nobody here would have complained if Ohhms had chosen to take up their own time and some more. 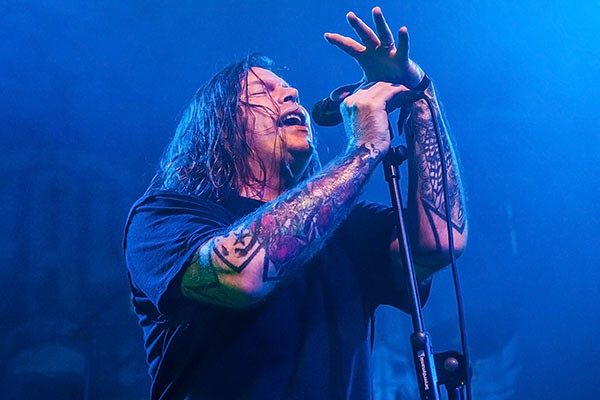 Trippy Wicked
Trippy Wicked and the Cosmic Children of the Knight are so likeable and irristably charming that they somehow manage to wangle a first class waiter service from the front-of-house security when their beer glasses need replenishing. As they offer up songs mainly based on the pleasures of smoking weed ‘Three Leaves’, naked women ‘Clothes On My Floor’, beer ‘One More Drink’ and psychonautic space travel ‘Going Home’ with such humble confidence, it’s impossible not to like both the music and the guys performing it. Guitarist Pete stomps across the stage, bassist Dicky seems to be constantly grinning at something funny that the rest of us haven’t see, and drummer Bill has a very impressive chest tattoo which just so happens to blend in perfectly with the HRH backdrop behind him. Trippy wicked put on a fine show and the punters embrace them fully. Clearly stoked about getting this gig Pete proclaims: “This never happens to us – ever!” Well my friend, keep putting on shows like this and you might well have to get used to it. 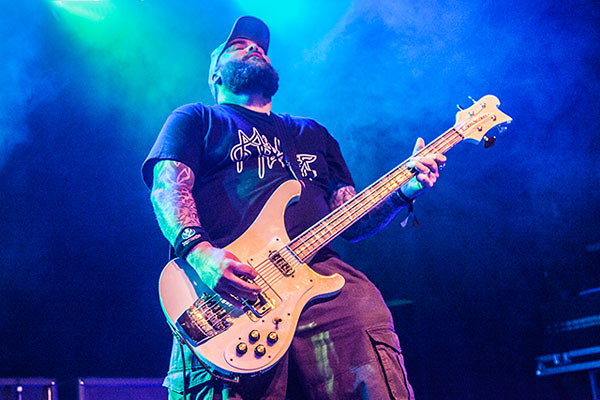 Witchsorrow
Hampshire three-piece Witchsorrow have clearly made a choice as to what they are offering as a live act. It appears that standing on the quality of their product has won the argument over a more visual stage show. To be perfectly honest for lovers of on-stage antics and energy there’s not a lot going on, but if you’re able to just stand and admire the musicianship of the trio then you are going to be treated to, and thoroughly wowed by, a fine display of unadulterated traditional British Heavy Metal, and let’s face it, who can argue against the virtue of that trade off? Frontman Necroskull, resplendent in his retro fringe sleeve leather shows a high level of competence, effortlessly switching from pounding rhythm to laser solo work. Bassist Emily Witch, looks like butter wouldn’t melt in her mouth, but it’s a sham, she’s a wolf who can throw out grinding basslines with the best of any of them. The physical fervour is provided by drummer Wilbrahammer who leaves no drum skin unthumped with his powerful approach. Necroskull and Emily do make the occasional trip across the stage to interact with each other and it should probably happen more often to maximise visually on the chemistry that obviously exists between them. ‘Disaster’ (the song not the predicament) finishes off a good set, definitely one for the metal purists amongst us. 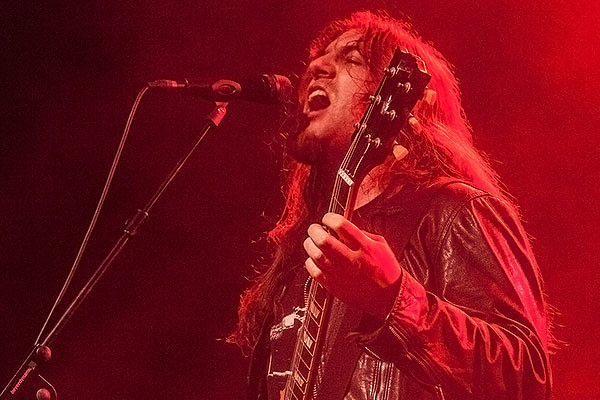 Raging Speedhorn
It’s been a good twelve months for the ever resurgent Raging Speedhorn, the recapture of ground lost in their absence, a new album and a host of high profile gigs that has allowed the band to reassert themselves as one of UK metal’s most prized assets. Now, amidst a palpable change in the atmosphere, from one of easy going appreciation to a tangible air of expectant menace, Raging Speedhorn can begin the next phase of their plan to dominate whoever wants to put themselves up as viable competition. The traditional feedback starts as the band saunter, swagger and skulk onto stage. The feedback builds, the pit sways, the feedback wails, the pit howls, the feedback screams to a crescendo of almost unbearable levels and then … ‘Hate Song’. The whole gig explodes into unstoppable tumult. Those not aware are knocked back on their heels and those not wanting to be caught in the maelstrom pit beat a hasty retreat to the safer fringe. There’s no real hiding place though, you’re going to get caught in the Speedhorn blast radius regardless. New tracks such as ‘Bring Out Your Dead’ have blended into the set unnoticeably, assimilated easily alongside Speedhorn standards like ‘Scrape the Resin’ and ‘Superscud’. All conveyed, full on, by the snarling Frank Regan and his attack dog cohort John Loughlin. Newer recruits Jim Palmer alongside Dave and Jamie Thompson have survived the seamless grafting on procedure and now contribute as much to the deliberately constructed bedlam as their founding colleagues. Loughlin’s control of a pit that has gone beyond pandemonium is absolute, as he circles them up over and over. Gordon Morrison assaults his kit is like a ‘roid raging Duracell bunny as he propels the Raging Speedhorn behemoth unstoppably forward. This is Speedhorn at their most wonderfully volatile and pugnacious best, and as ‘Ten Swords’ brings a clattering close to a remarkable hour of breath taking metal belligerence, one can only wonder and shiver at the heights Raging Speedhorn could be capable of scaling in the coming year. Game on then! 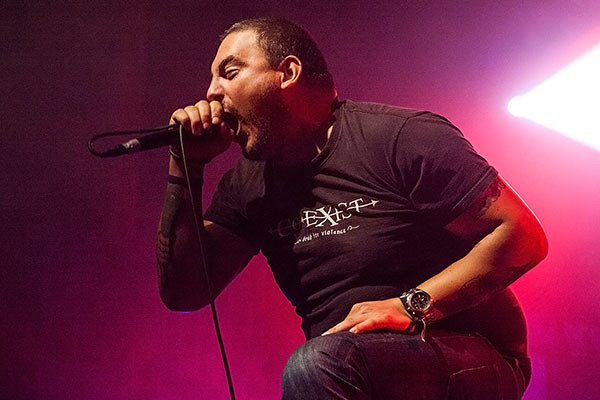 Candlemass
So, what do you do when a horde of merciless raiders have planted a massive “FOLLOW THAT!” flag right in the middle of your horizon for all to see? Well, if you’re Candlemass and you’ve been fighting these sorts of battles for three decades, then the one thing you’re not going to be is phased by any of it.  You’re just going to do what you’ve always done and that is to rely on every ounce of your experience, talent and consummate professionalism to provide what the public demand, an experience to remember. This, of course, is exactly what these Swedish masters do to the letter. Candlemass are big survivors in this cutthroat world of rock and roll and they are fully loaded with classics like ‘A Cry From The Crypt’, ‘Demon’s Gate’ and ‘Crystal Ball’ which they wheel out and fire off with maximum effect. Vocalist Mats Leven is Shakespearian, operatic and superbly over dramatic. His engagement with a pit – that was so recently beautiful anarchic – turns it back into the attentive, swaying, beguiled, single entity that responds to the chaos antidote which Candlemass offer. It’s more than a joy to watch these artisans at work, it feels like a privilege. Each number is a painstaking live recreation of its studio original. Cool, calm and very together guitarist Lars Johansson, rooted in a bridge wide stance never misses a lick, whilst fellow axeman Mats Bjorkman plays to the crowd, offering various sections of it their very own piece of the gig. Drummer Jan Lindh easily wins the contest for biggest kit of the weekend, but none of it is there just for show and Per Wiberg (filling in for Leif Edling) weaves a steel bass cable through the whole caboodle and binds it tight together until ‘A Sourcerers Pledge’ brings an exemplary Candlemass display to an end. Leven points out that tonight’s show is the highlight of their 30th anniversary tour, and to be honest it’s pretty much a peak experience for all of us who are here with them too. 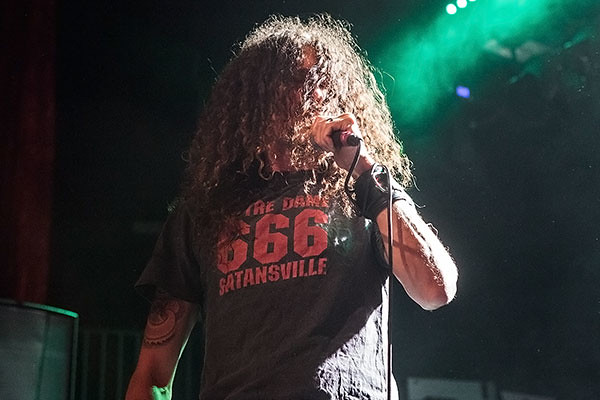 In the spirit of giving the punters maximum bang for their buck HRH put on a host of great bands on a second stage. Saturday saw Bong Cauldron and Desert Storm play outstanding sets to a room so packed late comers just couldn’t get through the door and in the parlance of the day they both smashed it out of the park. Poseidon  gets a genuine “A for effort” but it’s probably best to leave it at that. Vodun fought through some pretty persistent first half tech problems until a second half comeback really showed us why there’s such focus on this London crossover act.

Sunday gave us Brule who showed there’s no substitute for experience whilst Old Man Lizard and Dusteroid pinned everyone’s ears back with hard hitting shows. Druganaut did what any band with the suffix “naut” should do and that was to rumble through a power set like a runaway monster truck. Splendid entertainment from Stage 2 that could well see some of these bands moving up to the main stage next time.

So, what have we learned from the very first HRH Doom Vs Stoner?  We’ve learned that Jonni Davis and the HRH team continue to put the time, money and effort into providing well organised, punter friendly events in great venues.  We’ve learned that they continue to give the big platform to a lot of bands that would otherwise not get that valuable opportunity, and we learned that the Doom and Stoner genres are not just very much alive but growing at a satisfyingly healthy rate in dear old Blighty. Orange Goblin’s Ben Ward expressed the hope that HRH Doom Vs Stoner would become an annual event and with Doom Vs Stoner II already booked for next year, it seems he is going to see that wish fulfilled. Happy days.