It’s not “grim oop north” as the saying claims, not this weekend anyway, as the seven hills of the Steel City are filled with the sound of the very first HRH Doom Vs Stoner weekend, and we’re at Sheffield’s O2 Academy to investigate.

The honour of opening this inaugural event falls to south London trio Slabdragger who are, at times, endearingly dishevelled and disorganised in their appearance, organisation and approach to performing. This strangely adds to their end product and they kick off the party in fine style. Limb, it turns out, have lost one of theirs – guitarists that is, but all is not lost as they draft in Vodun axeman Marassa as a very capable replacement for the day. It pays to have friends in the right places and this is more than demonstrated as Marassa does Limb proud and the band give an excellent account of themselves. A quick mention here to the HRH punters who turn up early to pack the room for the two opening acts. Many would not be familiar with either band but they give both acts their full attention and appreciation, which indeed, is a theme of the whole festival.

Electric Citizen
Having made the long trip across the pond Cincinnati four piece Electric Citizen have obviously promised themselves that they would make this one count. Vocalist, Laura Dolan certainly has the voice to match her entrancing, dusky good looks and obvious sex appeal, but this is a house that is built on much more than aesthetics. There is clearly immense talent from all corners of the stage and this is a far more polished performance than we have seen thus far, but it might be an idea for Ms. Dolan to work on making more telling connections with a crowd that is there for the taking. Nit-picking aside, tracks such as ‘Magnetic Man’ and ‘The Trap’ are delivered with authority as Electric Citizen cause the first real stir of the day. 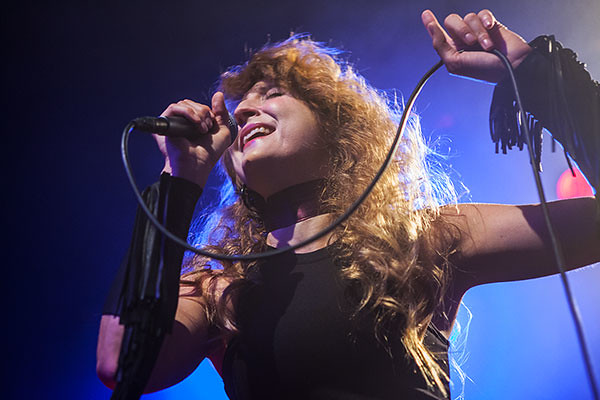 Conan
Conan are a pretty unassuming lot, there’s no fanfare or dramatic staged entrance just a very straight forward plug in and play deal. It soon becomes clear that when you have their kind of burgeoning, barrage of ammo, then big stage production values are at best superfluous and obsolete.  The pounding, pulsating, open chord glory of tracks like ‘Throne of Fire’ and ‘Hawk as Weapon’ splat into our heads, filling the hall with an unrelenting wall of sound that thuds around inside our bodies. Guitarist/frontman Jon Davis and the hooded bass monster Chris Fielding have the appearance of two ridiculously unbalanced, unearthly gargoyles screaming their angst at the universe. They form a pair of maniacal bookends framing drummer Rich Lewis who is clearly just here to do his “thing” and what a wonderful, wild thing it is. The pit awakens during ‘Gravity Chasm’ and the bodies begin to slam. As the name Conan would suggest, this is pretty savage stuff … and it makes your ribs hurt – brilliant. 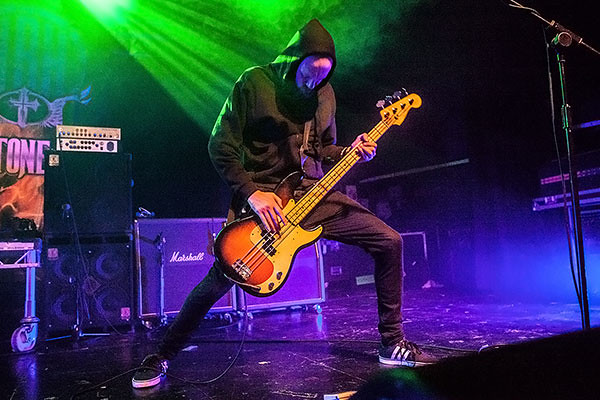 Black Spiders
After Conan deliver their musical representation of the most cataclysmic apocalypse imaginable, a change of mood seems to be more than in order. A lighter side, a side that recognises the joy of good time rock and roll, with no apologies made, step forward Sheffield’s own Black Spiders. Celebrating a decade of existence, the Spiders pull not a single punch, displaying every lesson they’ve learned during their years on one of the hardest roads known to mankind. Hometown crowds are your most loyal fans, but also your harshest critics, so after a brief exchange of the usual mutually appreciated “Fuck you Black Spiders” and just to make sure we’re all friends here, vocalist Pete Spiby wastes no time in corralling the crowd into the Black Spiders fold, involving them at every opportunity, making them part of the band, and it works unfailingly. Black Spiders are a real team effort – Spiby’s genuinely funny, self-effacing humour (yes Mrs. Spiby, your baby boy is definitely in a band!), a dying fly guitar duel from Messrs Lister and Thomas, and the boundless energy from bass bloke Adam Irwin who has dressed for the occasion in a mock tuxedo t-shirt. Drummer, Si Atkinson flouts a myriad of health and safety laws clambering atop his kit so he can conduct the HRH crowd more effectively, and then of course there are some great tracks such as ‘Stick It To The Man’ (do they ever!) and ‘Teenage Knife Fight’, all adding up to a genuinely entertaining spectacle. Tonight Black Spiders win out, not because of home comforts but by virtue of a performance of the highest quality. If all spiders were this much fun, arachnophobia would be a thing of the past. 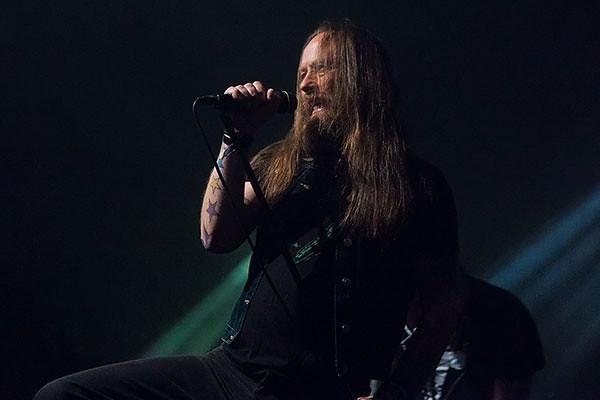 Angel Witch
You want to talk about old school? Angel Witch are from the school that existed before old school was invented. The term “veterans” doesn’t quite cover it and be it for reasons of nostalgia or curiosity – everybody comes inside for this one, with both of those appetites about to be sated, and then some. The band tear into the classics straight away with ‘Gorgon’ and ‘Confused’ before newer material such as ‘Dead Sea Scrolls’ shows that whatever “it” is, Angel Witch still have heaps of it. Bassist Will Palmer leers out to the onlookers, arms outstretched, before retreating back into his head shaking bass shell, to concoct his driving metal basslines. The unfeasibly wiry Jimmy Martin hops about from one foot to the other, like a nervous cricket, except that this cricket has a big ol’ guitar that he uses to provide crunching metal rhythms and nailed down licks. Along with Alan French, a drummer who appears so laid back you have to resist the temptation to run up and check for a pulse, the perfect complement to main man Kevin Heybourne’s unwavering leadership. Time and time again Heybourne treats us all to dazzling displays of fretwork as the band delve into their extensive classic, fist pumping, metal back catalogue. It simply enthrals everyone present and nobody abstains from the all-out sing-a-long version of the bands eponymous track ‘Angel Witch’ that brings an outstanding performance to a close. Class, as they say, is permanent. 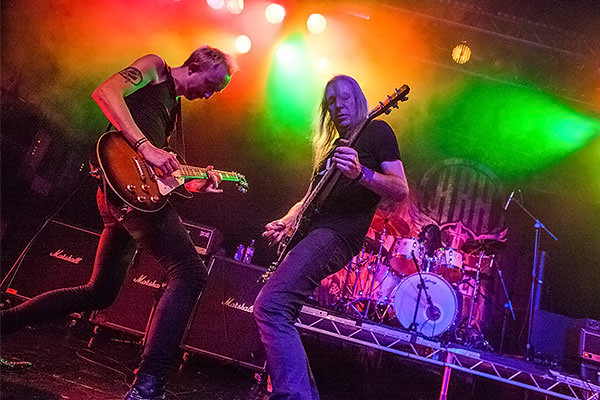 Orange Goblin
It would probably amount to gross negligence not to have Orange Goblin as headliners at a gig like this. Luckily, the good people at HRH are way ahead of the game. So here we are with AC/DC’s ‘Long Way to the Top’ drifting over our heads –  a by now, familiar portent that the arrival of the genuine frontrunners of the UK’s (and beyond) Stoner genre is imminent. Joe Hoare, Martyn Millard and Chris Turner drift stageward to take up their places, as Ben Ward – a man so tall he proves that white men don’t need to jump – strides on. All hair and denim, taking front of the stage where he stoops, fists clenched, roaring to the gathered, Ward looks like an ancient Celtic warlord inciting his warriors to battle. The rammed out Sheffield O2 Academy crowd responds with a roar of their own and we’re off, Saturday night, Orange Goblin style. It’s one joy bomb after another with ‘Saruman’s Wish’, ‘Blue Snow’ and ‘Phoenix from the Flames’ delighting a heaving pit. Guitarist Joe plays it all brilliantly, loose and free, narrowly surviving a rabid zombie attack from Ben during ‘They Come Back’ (never missing a note mind you, what a pro!) Martyn, tight lipped and hunched over, trips his fingers over his bass as easy as you like, a great example of the passive/aggressive musician, as Chris lollops around his kit in that lazy style common amongst Stoner drummers – only better. Ben, the friendliest of BFG’s is everyone’s best mate; he makes us all feel that way. He’s in fine voice and belts out a 100% committed performance – not that we’d expect anything less. And before we know it, time has zoomed by – which always happens with Orange Goblin’s no quibble, good time guarantee – as ‘The Fog’ and the stupendous ‘Red Tide Rising’ bring the house down and this wonderful Saturday to a close. Same time tomorrow everyone? 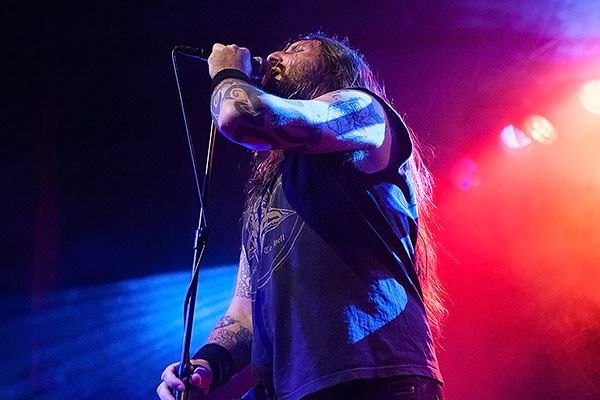