Stepping into the razor sharp teeth of a December winter wind is a prospect most would find easy to resist. However, in terms of incentive the chance to see the return of Raging Speedhorn – once the great white hope for British metal – making their return to the UK circuit is a lure too intriguing to pass up.

We’ve taken the bait and hustle our way down to the Birmingham O2 Academy 3 to find out if time has taken it’s toll on the East Midlanders metal delivery system. The heat that envelopes us as we enter the room from the frigidity of the street is not just the result of an overenthusiastic thermostat, but also from the very plausible, electrically charged buzz that emanates from the sizeable throng gathered there.

Raging Speedhorn don’t do “low key”, never have done, never will, so from the moment drummer Gordon Morrison saunters on-stage and kicks in the traditional feedback and the watchers kick in their traditional “SPEEDHORN, SPEEDHORN!” chant, it becomes very clear that anything but “low key” is about to happen. As the rest of the band arrive, vocalist Frank Regan announces the onslaught as he roars out the first lines of the pulverising, pulsating opener ‘Knives and Faces’. It’s an astonishingly forceful start that truly takes the breath away and smacks the pit into uber-turbo mode from the get go.

Regan obviously sees the stage as his own personal adventure playground as he climbs and clambers onto and over anything he can get a foothold on. He perches high as he leads his cohorts into ‘Superscud’ and ‘Scrape the Resin’, both delivered with sledgehammer and anvil ferociousness. Messrs (Jay) Thompson, (Jim) Palmer and (Dave) Thompson on guitars and bass respectively strike their stances low, very low. This is presumably to attain as rooted a stance as possible to ensure they are not physically blown away –  like oaks in a hurricane – by the colossal wall of sound that they generate in collusion with the Fester-esque Gordon Morrison.

Morrison, who assaults his kit as opposed to playing it, is the power core of the whole Speedhorn reactor and he drives it all on relentlessly and unforgivingly. In the midst of all this marvellous mayhem – prowling, always prowling, is the template metal pit bull John Loughlin. Loughlin has been putting the rage into Speedhorn from day one, but tonight it seems he has new belligerent purpose. Every phrase he barks with his trademark guttural vocal is delivered as if it were a personal threat. In between times he either surveys the the subjugated watchers – eyes manically rolled back in his head, or busies himself conducting the pit into even greater exertions. New track ‘Halfway To Hell’ (not highway John) is an indication of how the new recruits’ involvement is going to pan out, more of the same it seems. Awesome.

Line up changes are always a worry for fans who have learnt to rely on the familiar. Any fears the Raging Speedhorn faithful may have had must surely be swept away by what they see here. The knuckle tight, emotionally charged style of Palmer and the frenetic, unbridled methods of Thompson marry up perfectly, whilst Thompson II delivers a bass line that is so low – an ant could take a crap on it.  To give them their credit the three new guys add a little more visually to the Speedhorn concoction and the onstage chemistry between them is blatant. Together, under Morrisons reliable stewardship and the reinstated and rejuvenated visceral vocal tag team of Loughlin and Regan it all adds up to a perfect metal storm.

Speedhorn aren’t in any mood for mercy as cranial crushers ‘Iron Cobra’, ‘The Hate Song’ and ‘Chronic Youth’ take the whole gig beyond frantic and into insanity. This isn’t just a pounding, this is like being flattened under tank tracks and all the Speeders present love it. The industrial grinder, jump along anthem ‘Thumper’ and the gloriously over-exaggerated ‘High Whore’ slam the door shut on a devastatingly powerful set.

Raging Speedhorn don’t do encores, they don’t need to. Every statement they have to make is done first time around. Nobody complains, they’re just glad to get their breath back. In fact it’s almost a pleasure to step back into the cold of winter just to regain one’s senses, with Speeders excitedly recounting the experience to each other as they drift into the night.

Any doubts about the wisdom of a reunion have been emphatically dispelled by this showing. It was a performance of confidence and purpose that only a certain kind of hard earned maturity can bring. A performance played out with smiles along with that unmistakable “screw you!” Speedhorn attitude. A performance that tells us, the boys from Corby are back. Let the good times roll. 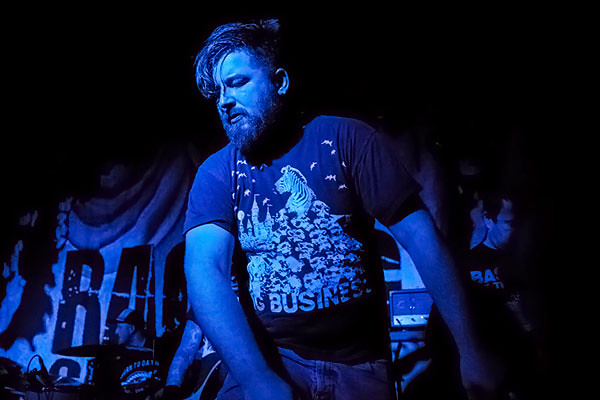