When watching Monster Magnet play a 450 capacity venue on one of only two UK club dates, it’s easy to forget how far this explosive and exciting stoner/space rock band came before disappearing back into obscurity.

New Jersey rockers Monster Magnet were formed in 1989, fusing a template born of metal, punk, space rock and psychedelic influences. The 1995 album ‘Dopes to Infinity’ catapulted them into MTV limelight, before the eventual commercial success of 1998’s ‘Powertrip’ when the band became international superstars with two years worth of world tours with the likes of Aerosmith, Metallica, Rob Zombie, and Marilyn Manson.

Accompanying founding and only original member – vocalist and guitarist Dave Wyndorf – are Garrett Sweeny (lead guitar), Phil Caivano (rhythm guitar), Jim Baglino (bass) and Bob Pantella (drums). And as rock ‘n’ roll units go, these dudes ooze cool and slickness from the off, as they slide into ‘Hallucination Bomb’ from 2010’s ‘Mastermind’ album.

Regardless of how much is written about his overdose, rehab, relapse, weight gain – Wyndorf is looking pretty good. He may no longer be the leather clad panther he was back in the 90’s, but at 56 he has clearly battled well against the bulge. Quite how he survives the set – in these sweltering conditions – in a leather jacket I don’t know, but the vocal is true and powerful, through the stoner grooves of ‘Dopes to Infinity’, ‘Twin Earth’ and ‘Look to Your Orb for the Warning’.

Many folk talk about Monster Magnet in the past tense and how they were the soundtrack to a period of their lives. No doubt there are numbers here tonight attending simply to indulge themselves and reminisce, but when a band consistently delivers heavy, trippy and insanely listenable space rock, you have to ask yourself why are they not somewhere further ‘up there’, when the likes of QOTSA are making such a mark on the hippy youth of today.

With the new album ‘Last Patrol’ due out in October, it’s a shame no new material is forthcoming tonight. However, Bristol happily melts along to ‘Longhair’ and ‘Spine Of God’ before an inevitable trio of tracks from ‘Powertrip’. The title track is sandwiched between ‘Crop Circle’ and the quintessential rock anthem ‘Space Lord’, where Wyndorf directs proceedings, to wit – “When I sing motherfucker! .. You sing motherfucker!” Really, Dave, you think these people need telling?

I have to admit I’m gutted not to hear – from my own personal soundtrack – ‘Negasonic Teenage Warhead’, but the encore of ‘Atomic Clock’, ‘Cage Around the Sun’ and ‘Tractor’ complete an incredibly creative and varied set of hard, psychedelic rock.

The whole Monster Magnet experience is crazy, it is addictive, and like so many others –  I can’t wait to hear what they have in store with the upcoming album. I just hope there’s a next time, when I can experience Monster Magnet on the bigger stage. 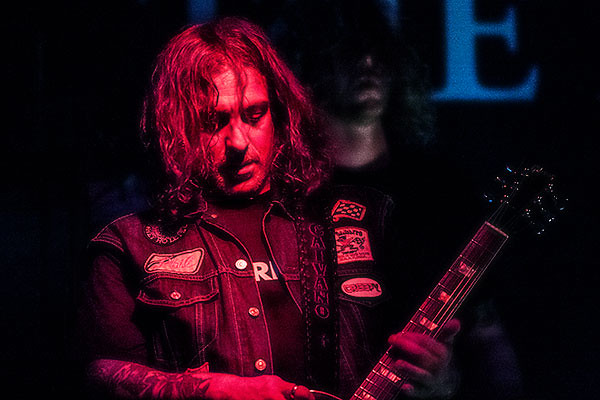