It’s TV Smith who kick things off tonight with style. Delivering a tight, quick-fire set, they finish up with ‘Gary Gilmore’s Eyes’, the first of what promises to be a night of timeless crowd pleasers. It truly ignites the venue for the first time and is an exciting portent of things to come.

The Professionals provide us with a set that has multiple elements to it, a guitarist flown in from L.A. , apt professionalism, casual “so what?” punk attitude, a bit of anarchy and mid-song discussions. These are the things you can get away with when one of your number helped change the course of music forever – and it is the music that wins the day with ‘Silly Thing’, ‘(I’m Not Your) Steppin’ Stone’ and ‘1-2-3’ they win the hearts and minds of the watchers.

After an extensive and somewhat patience testing medley of 70s and 80s TV themes, Stiff Little Fingers finally appear onstage and waste absolutely no time in revving up an already enthused throng. Delivering a punk 101 double tap of ‘Suspect Device’ and ‘At the Edge’, it’s a fantastic outlet for energy that has been pent up for far too long in both the band and those gathered, and the expression of it is purely unbridled.

Frontman Jake Burns speaks for all of us when he relates his pleasure at finally being able to return to a live stage and this particular, previously curtailed, tour. With his naturally engaging personality and Ulsterman charm he chats with, not at, his audience. Such is his manner it’s reasonable to think he’s a guy we could sit down with for a pint and a chinwag, and be treated the same. It’s this aspect that truly connects the watchers to the performers. Of course, serving up a barrage of classic SLF numbers such as ‘Nobody’s Hero’, ‘Barbed Wire Love’ and ‘Tin Soldiers’ doesn’t hurt either.

Stiff Little Fingers have never been overly political, but they have always been primarily compassionate. International Women’s Day, mental health and the current hardships experienced in Ukraine receive respect and dedications to the absolute approval of all present.

The unmistakable opening chords to second encore number ‘Alternative Ulster’ send the relentlessly pumped up watchers over the edge and into nostalgic ecstasy and closes out an accomplished performance.

If Stiff Little Fingers have proven one thing here tonight, and over the four and a half decades of their existence, it is that punk’s not dead, it’s immortal. 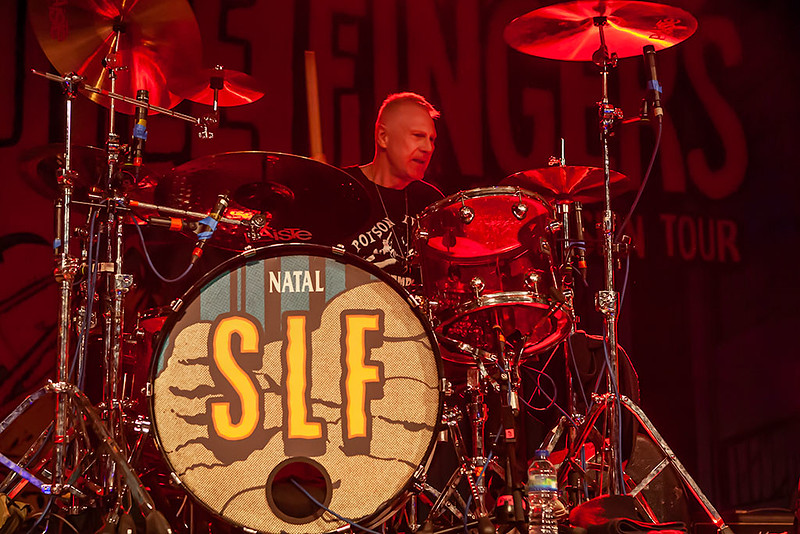