As the summer festival season draws to a close, Hit The Lights travels to South Derbyshire to experience the 2017 edition of the continuing success story that is Bloodstock Open Air.

Forever Still provide early movement towards the pit area as they grab the chance to step up onto the big stage, while Chelsea Grin give everybody plenty to smile about with an impressive early showing of American deathcore. To follow up this juddering opening duo, Whitechapel continue the all-out, primary metal assault with some choice cuts that Jack the Ripper himself would be proud of. Bloodstock 2017 and the main Ronnie James Dio stage is indeed up and running, and it’s running at breakneck speed.

Devilment
Devilment have enough power to chug their own boat along, but when you add the genial Dani Filth into the mix the pay-off is going to be incendiary to say the least. This is a fact born out here as Devilment power through a set of fine British metal. Mr Filth adds character for sure, but his band mates share the load. Colin Parks contributing some pretty hefty lead guitar presence whilst Lauren Francis provides subtlety and elegance to the impressive show. There are more devil horns than you can shake a trident at, as the watchers truly stir for the first time.

Soilwork
Early on Soilwork appear to suffer from an indifferent sound as Bjorn Strid’s vocals are somewhat buried amongst the rest of the mix. However, by the time ‘The Living Infinite I’ is served up on a sledgehammer, all is well and Soilwork find their stride. Wading into the Bloodstock faithful over and over with ‘Death In General’ and ‘Late for the Kill, Early for the Slaughter’, the Swedes are an impressively cohesive outfit. Strid demands more from the pit than has been asked thus far, and they respond like the salivating dogs they are. The burgeoning guitars of Coudret and Andersson deliver the goods as ‘Stabbing the Drama’ bangs an emphatic full stop onto a stirring set. Soilwork at BOA 2017? Yeah, we can dig it.

Decapitated
Polish Tech/Death outfit Decapitated know a thing or two about stamping their authority on a gig. For twenty one years they’ve been ripping people “new ones” wherever they go. and they’re not about to change any of that here today.  Vocalist Rafal Piotrowski – his cascading drapery of dreadlocks, flowing endlessly about his belligerently expressive face – delivers a wonderfully guttural vocal, barking orders at the pit who do as they’re bloody well told without hesitation. Even amidst the ugly, dark August sky, cold with rain, the temperature noticeably rises.  Piotrowski is book-ended by the super tight bass and guitars of Hubert Weicek and Vogg Kieltyka and the awesome power drumming of Michal Lysejko which propels everyone along with it.  There’s no doubt this is going to be a tough act to follow, hardly surprising as Decapitated pretty much remove the heads of anybody standing within the first ten rows or so. Outstanding.

Testament
Testament don’t fear anyone, why should they? It’s they who have decades of power and glory behind them. They’ve got nothing to prove but they do anyway, just for kicks, giggles and because it resides deep in their DNA. From the moment they open with relative newbie ‘Brotherhood of the Snake’ you just know you’re going to have the living doo dah entertained out of you. Of course Chuck Billy leads the infectiously enthusiastic parade with his air guitar frenzy, power vocal and Cheshire cat grin (seriously, how can you not love this guy?) but today guitarist Alex Skolnik is totally “on it”. He pulls out every single stop known to man and gives a start to finish dazzling display of crafted showmanship, leaving all those watching bewildered with its finery. Meanwhile, ‘Into the Pit’ does what it says on the tin and send today’s pit into hyper drive. This is a prime chunk of Bay Area thrash, even the long-time MIA track ‘Low’ gets an outing. A gauntlet had been thrown down and Testament picked it up and swallowed it whole.  Closer ‘The Formation of Damnation’ leaves a steaming cloud of perspiration hanging over the pit as the rest of us try to regain our senses.

Blind Guardian
What better than a bit of pomp and high art to set us back on steadier feet after the mayhem that went before? Not many bands could fit that bill as well as Blind Guardian. Solid, precise and reliable is what we get from them and quite frankly it’s what we need. The choral grandeur which accompanies their opening number ‘The Ninth Wave’ washes over us with reviving refreshment, turning our minds back to the world and its wonders. If the truth be known, as a visual spectacle Blind Guardian don’t pack that much of a punch, but their technical brilliance is, well … brilliant.  The clean cut Hansi Kursch has a voice which is as clear and crisp as a mountain stream and he drops not one single note in his superb live delivery of fan favourites ‘Welcome to Dying’ and ‘The Script for My Requiem’. He also brags on his improved English, which it has to be said is no idle boast. Despite the lack of onstage exhibitionism, the musicianship of Kursch’s band mates (Messrs Olbrich, Siepen and Ehmke) is indeed something to behold. Blind Guardian are not a band to leap around to, they’re a band to be listened to, observed and experienced. The majestic ‘Valhalla’ which finishes their set, is a thing of beauty and we can thank the German artisans for helping us breathe again.

Amon Amarth
There’s a lot of affection around these parts for Amon Amarth. The Swedish Viking giants have been regular visitors at BOA over the years culminating in tonight’s headline slot. Both have come a long way since their inception and as the horned warrior helmet stage set is revealed a palpable and intense anticipation hangs in the air around us. The band stride on and take the salute before hurtling headlong into ‘Deceiver of the Gods’ and ‘As Loke Falls’. The whole set is one big occasion – balls of fire shoot into the air from every angle, a massive and beautiful Viking warrior backdrop is exposed, and a couple of actual warriors appear during ‘Way of the Vikings’ to battle with shield and sword in a good old fashioned Nordic set to.  We get a brief lesson in Norse mythology from frontman Johan Hegg and even the trickster god himself Loki, puts in an appearance, casting his naughty eye over the Bloodstock faithful. There’s a claim to a world record by Hegg for most Viking rowers in a pit (well done for organising that one!) as unified head twirling along with Mikkonen, Lundstrom and Sodeberg make them appear as human wind turbines. Maybe that’s where Amon Amarth generate the energy to power this colossal exhibition? It is, as Hegg claims, a true Viking feast which is brought to a raucous end by the towering ‘Twilight of the Thunder God’. What a start to the weekend, what a band, what a show! Odin and the old gods have indeed smiled upon us kindly by sending Amon Amarth to Bloodstock, and we should all be very, very grateful. 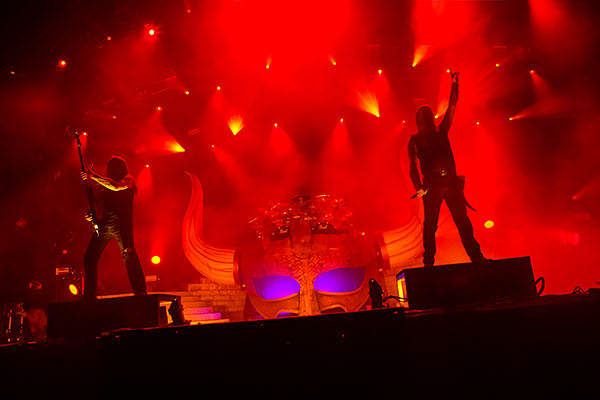