Formed in 1993, Canadian rockers Billy Talent are a concoction of post-hardcore familiarities. Currently touring on the back of their fifth studio album ‘Afraid of Heights’, Rock City is rammed to the rafters tonight to welcome their brand of sharp, fast and melodic angst.

Benjamin Kowalewicz’s characteristic screamer of a voice, along with the abrasive backing vocal of guitarist Ian D’Sa – not to mention his superb rhythm technique, lead melodies  and extravagant hairdo – knock punters off their feet with opener ‘Devil in a Midnight Mass’. It’s the beginning of a set filled with relentless energy, rapid-fire aggression and thought provoking lyrics, all played out to a venue begging for more from start to finish.

We’re a few songs in before the new ‘Big Red Gun’ and ‘Afraid of Heights’ fuel the crowd no less than those tracks a decade older. “I fuckin’ love this place!” shouts Kowalewicz. “You wanna go home early and watch Westworld, or do you wanna sing a song?” The response to his enquiry is an obvious one, before the epic ‘Rusted from the Rain’ continues to hold them firmly in the palm of his hand.

With bassist Jonathan Gallant making up the red-shirted trio across the front, at times Billy Talent appear as youthful in age as they are in performance – certainly not looking to be in their forties and nearly twice the age of the majority of the audience. Kowalewicz encourages the Rock City faithful to have some fun and asks the gentlemen to show some respect to the ladies: “No lady likes an elbow in the face” he says – good advice for those paying attention before another newbie ‘Leave Them All Behind’.

Jordan Hastings from Alexisonfire is the fill-in drummer for Aaron Solowoniuk who continues to focus on his health after a multiple sclerosis relapse. No doubt Aaron can’t wait to be back where he belongs, but in the meantime fellow Canadian Hastings is doing a grand job, which he proves as the band progress through ‘Pins and Needles’, ‘Surrender’ and ‘River Below’.

Kowalewicz tells us a story from the band’s day off yesterday – when eating out in Nottingham he sat behind a couple talking about which Billy Talent t-shirt they were going to buy at tonight’s show. He dedicates ‘Surprise Surprise’ to them – which no doubt it is, although tapping them on the shoulder at the time would probably have been the better plan.

During ‘Ghost Ship of Cannibal Rats’ the house lights are called for and the band survey all those before them. Kowalewicz relays what a privilege it is to be back playing on a stage with such history, and how important it is to keep independent venues going. All of this before ‘Louder Than the DJ’, ‘Devil on My Shoulder’ and the stomping anthem ‘Viking Death March’, during which there’s time for a en vogue slagging off of Donald Trump.

‘Try Honesty’ from the 2003 self-titled debut album is first of three for the encore with Kowalewicz bringing it right down to thank Nottingham for welcoming Billy Talent to the UK for the last twelve years. “In such a fucked up world, only this band and YOU make sense” he says. It’s a sentiment well received before fan favourite and the appropriately autumnally titled ‘Fallen Leaves’ has the place rocking, and right to the end with ‘Red Flag’.

Billy Talent are a must-see for any alt punk rock fan. Tonight they bought their A-game to Nottingham, a full-throttle unfaltering performance from a band who really do give it absolutely everything in the live environment. 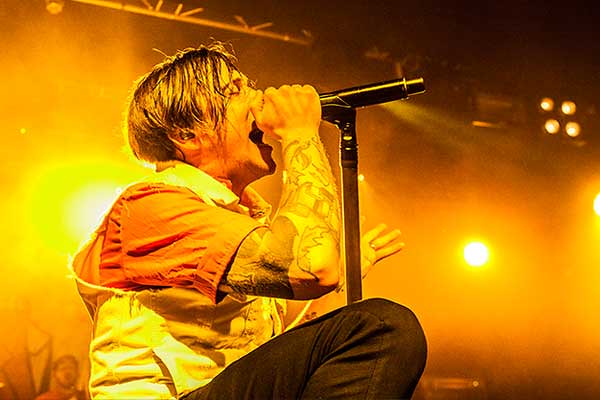