Now that the English summer has arrived, reasons to step out of the all too rare sunshine and into the concrete colossus of the Manchester Apollo are hard to find. Unless of course, a guitar master is in town.

This is Satch’s first solo visit to the UK since his 2010 Black Swans and Wormhole Wizards Tour, and although far from “packed to the rafters”, for many – the chance to see a man who’s list of students, let alone his own musical catalogue and CV – is a prospect too good to pass up. A fair attendance traipse through the Apollo doors tonight, like the preverbal moths drawn to the equally preverbal flame.

Manchester’s very own Matt Schofield has been given the task of whetting the appetite, and it’s not hard to see why he’s been invited. His solid set of blues-rock-jazz fusion guitar driven works are delivered with easy confidence and only serve to enhance his growing reputation.

“Unique” is that watchword in any conversation regarding Joe Satriani. You can’t avoid using it because he is the very definition, and his uniqueness pervades everything and everybody around him. This is confirmed by the unique (see what I mean?) spectacle of Marco Minnemann’s set opening drum solo, which leads into ‘Cool #9’.

Joe wastes zero time in letting those liquid lightning fingers drool all over his pounded fretboard and into ‘Flying In A Blue Dream’, before the anthem ‘Satch Boogie’ shakes the audience out of their awestruck trance and into spontaneous applause. And this is how the pattern is set for the rest of the evening – Satriani doing his thing with unfathomable magic.

It’s a while before any new album tracks are given an airing – the first, being the aptly titled eponymous number ‘Unstoppable Momentum’, before three parts of the record is belted out, including ‘Three Sheets To The Wind’, ‘I’ll Put A Stone On Your Cairn’, the single ‘A Door Into Summer’ and ‘The Weight Of The World’.

Along with a smattering of back catalogue tunes such as ‘The Crush Of Love’, ‘Devil’s Slide’ and the epochal ‘Surfing With The Alien’ – the set is a heady mix which inspires involuntary comments of “Wow!”, “Incredible!” and “Genius!” from those gathered to see Satch cajole, squeal and scream those six strings into submission.

Aided and abetted by Bryan Beller on bass, Mike Keneally on keys and guitar, and with a freakadelic light and visual show, it’s a transfixing occasion to behold, before appropriately finishing with ‘Summer Song’.

Satriani takes his deserved plaudits, showing heartfelt appreciation for the crowd’s attention, before they shuffle their way out into the cool night air – conversation subdued and enjoying the sensation one gets from the all too rare opportunity of watching a genuine master at work. 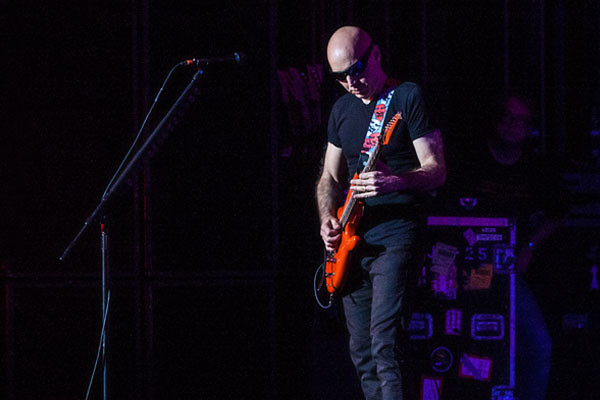