A year later than it should have been, the Blink-182 arena tour finally hits the UK, supporting the album ‘Neighborhoods’ released in September 2011.

Further to the band’s acrimonious 2005 split, reunited after vocalist and guitarist Tom DeLonge’s successful battle with skin cancer, and drummer Travis Barker’s escape from a plane crash, the album contains the first new music released by the band since 2003.

I was a fan of Blink-182 during their peak – at the time of releasing ‘Enema Of The State’ (1999). Still clinging onto my twenties, I was taken in by their puerile, pop-punk, sing-a-longs. I still like the album that went on to sell over 15 million copies, but thirteen years later – I have to question if their live performance and up-to-date material will be for me.

The LG Arena is fit to burst tonight, and time passed clearly makes little difference to the Blink-182 demographic. Groups of over excited youngsters make me and other oldies hiding out in the safety of the seated sections, look and feel like the oldest swingers in town. The set consists of favourites: ‘Feeling This’, ‘The Rock Show’, ‘What’s My Age Again?’, ‘I Miss You’, ‘Dumpweed’ and ‘All The Small Things’ alongside tracks from the more recent album.

Vocalist and bassist Mark Hoppus marches around the arena stage as if he is out to cover every inch. He rarely introduces a song in the energy-packed, career-spanning set, without making work of some pretty unfunny banter with the more serious DeLonge. Although, it has to be said that references to drug intake and sexual innuendo keep the kids next to me ecstatic throughout.

State of the art lighting, screens and graphics lend themselves to a very cool arena production. Along with Blink-182’s simple, stripped down, pop-punk – it is a show that has everything a fan could want. A nice touch is the first encore when Hoppus and DeLonge play acoustic versions of ‘Reckless Abandon’ and ‘Going Away To College’ from the sound desk. This comes before Travis Barker’s drum solo back on the main stage. Not the most “punk” thing to do, but he is a tremendous drummer all the same.

During ‘Carousel’ and ‘Dammit’ I realise that Blink-182 are the same as they ever were – really enjoyable. Although I am left a little disappointed. Perhaps for me, it’s simply a lack of musical and lyrical progression. But as the house sings-along to ‘Family Reunion’, the repeated line: “Shit, piss, fuck, cunt, cocksucker, motherfucker, tits, fart, terd, and twat!” I figure the majority of tonight’s audience didn’t come for anything more than what they got. 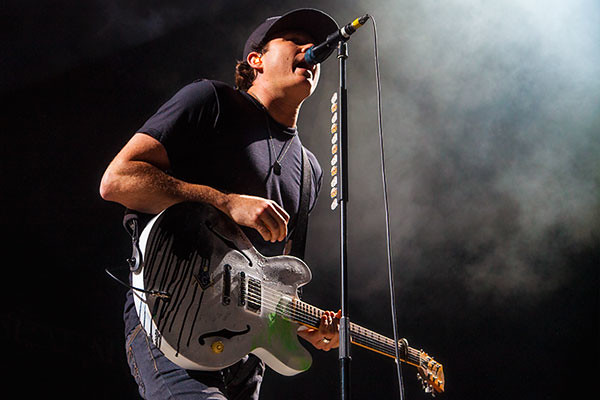