In September came the release of the Manic Street Preachers tenth studio album ‘Postcards From A Young Man’, which according to Nicky Wire is the Welsh rockers “one last shot at mass communication”.

Tonight’s show is a rescheduled date from the follow-up UK tour, after James Dean Bradfield fell ill, but clearly the delay has bothered nobody. A packed house and buoyant Birmingham crowd await the entrance of this great British institution, approaching their twenty-fifth year of existence.

With silver mannequins on-stage, the trademark collection of feather boas on Nicky Wire’s mic stand, and Echo and the Bunnymen playing as their intro tape, the band emerge with ‘You Love Us’, the anthem from their 1992 debut album ‘Generation Terrorists’. Then comes ‘Your Love Is Not Enough’, ‘Motorcycle Emptiness’ and the first of only three new tracks played tonight: ‘It’s Not War (Just The End Of Love)’.

The Manics may not be used to playing such small surroundings in recent years, but the intimate feel of the O2 Academy offers the chance to see them up close and personal. Any fears that they were sliding gracefully into middle age, were quickly dispelled as both Bradfield and Wire pogo and pirouette their way through a set which includes ‘Everything Must Go’, ‘Roses In The Hospital’, ‘This Is Yesterday’, ‘Australia’, ‘Ocean Spray’,  ‘La Tristesse Durera’, ‘Motown Junk’ and ‘If You Tolerate This Your Children Will Be Next’.

Among the highlights of a storming show is James Dean Bradfield’s solo acoustic spot. He has the entire audience eating out of the palm of his hand with a sing-along rendition of ‘You Stole The Sun From My Heart’, followed by Wham’s festive favourite ‘Last Christmas’, before Sean and Nicky return to the stage, for the monstrous ‘Faster’.

Richey Edwards, the Manics lyrical lynchpin and rhythm guitarist vanished on 1st February 1995. However, he continues to be named in the band line-up every time they introduce themselves during live performances. Wire tells fans that he is remembered every time they take to the stage, before dedicating ‘No Surface All Feeling’ to his missing writing partner and friend.

The Manic Street Preachers never do encores, so as they head towards the finish with ‘Golden Platitudes’, ‘Suicide Is Painless’ aka the theme from M*A*S*H, and ‘Tsunami’ from their 1998 album ‘This Is My Truth Tell Me Yours’, the sold-out Birmingham crowd are whipped into a final frenzy for the epic curtain-closer ‘A Design For Life’. Ok, it might be predictable, but what other finale would have done? 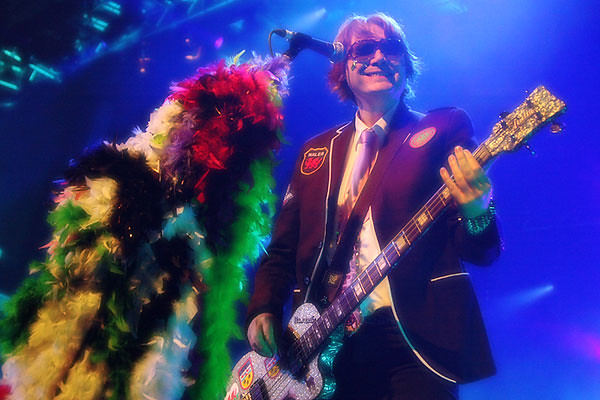